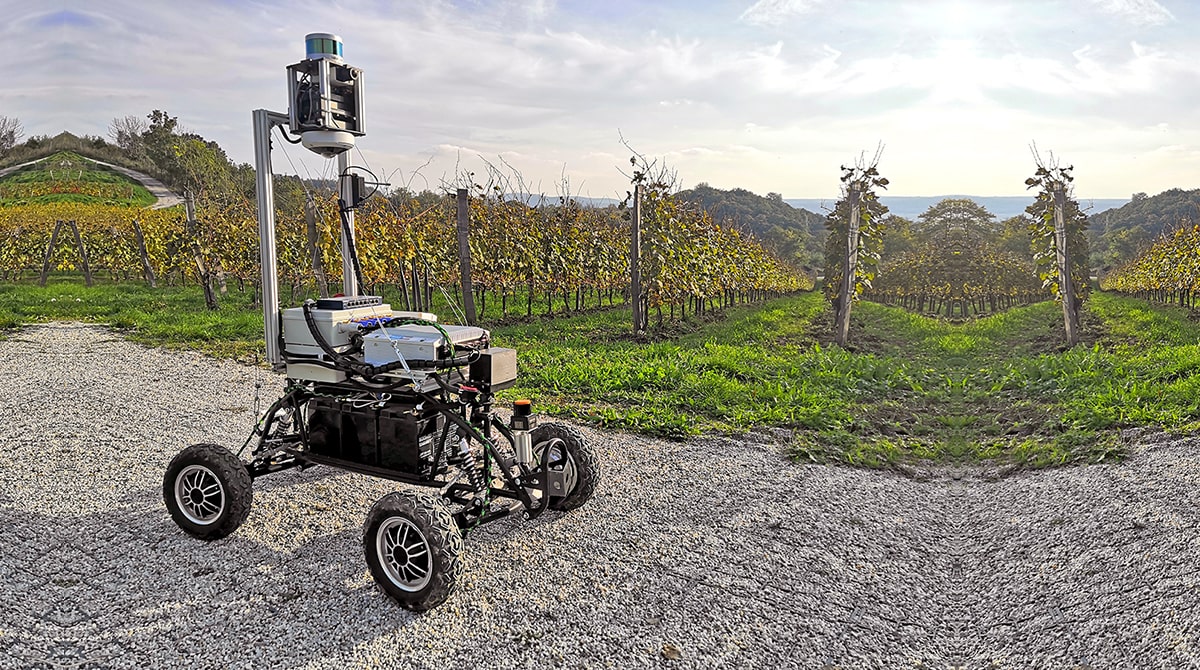 RoboTech Vision strives to develop universal algorithms that can be easily applied to a wide variety of devices. The company is therefore testing them on several platforms, such as the Husky A200 robot with a differential chassis or their own Androver II robot with a Double Ackerman chassis. Each type of robot uses a different type of autonomous navigation, depending on its hardware capabilities.

After almost two years of developing autonomous navigation algorithms, the company has managed to develop an algorithm using artificial intelligence that allows the robot to move autonomously in the vineyard. It is a reactive navigation without the use of GPS, where the robot responds to the environment. It uses the IMU and especially the RTV sensor Box with its visual system.

The RTV sensor Box is a universal device that combines a 360° camera, a front camera and a 3D laser scanner. “The robot uses the forward and 360° camera with the help of a neural network to distinguish between the grapevines and foreign objects. With the help of LiDAR, the robot orients itself in the vineyard, avoids obstacles and stays in the middle between the rows,” says Ing. Matej Vargovčík, a robotic engineer from RoboTech Vision, who developed autonomous navigation in the vineyard.

Before starting the application, the user selects how many lines the robot should drive autonomously. The robot starts from the starting position to which it is navigated by the teleoperator or arrives at the place without assistance. “The RTV sensor Box can be used not only in the vineyard, but also for autonomous navigation on the road. The idea is to combine these two types of navigation so that the robot could autonomously get to the starting point in the vineyard,” adds engineer Vargovčík.

Once the robot is in the right place, it will enter the first row autonomously using our algorithms. Live view from the robot’s camera and its telemetry data can be monitored from the control center thanks to WiFi network. If necessary, the user can take control of the robot with a joystick. The algorithm also includes the detection of obstacles that the robot is trying to avoid or stop in front of them. The device also includes a stop button that disconnects the robot’s drives and stops it immediately.

In addition to autonomous row navigation, the robot can move to the next row without human assistance. If a device on which the algorithm is applied has a large turning radius, it can be set to passage through even rows and return through odd rows. Autonomous navigation is also adapted for a vineyard whose rows do not end in one parallel line.

“The advantage of robots can be accuracy and precision. It would therefore be appropriate to use them in vineyards for work assignments where the quality of the operation can make a significant contribution to greening viticulture.“

Professor, Department of Viticulture and Enology

According to professor Ing. Pavel Pavloušek, Ph.D. from Mendel University in Brno, the use of robots in viticulture has proven to be very important. “For several years, I have been working on the use of unmanned monitoring of vineyards to improve the identification of grapevine infestation by pathogens and the prognosis of fungal diseases. Experience so far has shown that it would be appropriate to extend aerial surveillance by monitoring certain parameters directly in the vineyard. Robots can provide an invaluable service in this regard,” he claims.

According to Pavloušek, viticulture is also struggling with a shortage of manual workers, and therefore every effort is made to mechanize all work processes in the vineyard. “The advantage of robots can be accuracy and precision. It would therefore be appropriate to use them in vineyards for work assignments where the quality of the operation can make a significant contribution to greening viticulture,“ thinks the professor.

According to the professor, it is also very important to minimize the mechanical damage to the plants. “Damage can increase the susceptibility to biotic stress, such as the complex of vine trunk disease, the most well-known disease which is known as ESCA in our country,“ says the professor. „I therefore think that drones and robots can become a common part of viticulture in the near future,“ he adds.

Androver II robot moves autonomously between the rows of the vineyard 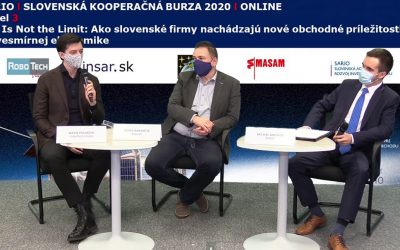 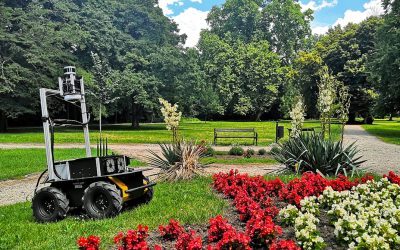 We tested our map-based autonomous navigation in three different environmentsJuly 30, 2020  |  Development Thanks to our algorithm, the Husky A200 robot from the Canadian company Clearpath can cross the specified route autonomously in different...

Robots against coronavirus. How does legislation take their safety into account?

Robots against coronavirus. How does legislation take their safety into account?July 20, 2020  |  Related Technological development is moving at a fast pace and innovations are becoming a more common part of our lives. Their importance is also...

This website uses cookies to improve your experience while you navigate through the website. Out of these, the cookies that are categorized as necessary are stored on your browser as they are essential for the working of basic functionalities of the website. We also use third-party cookies that help us analyze and understand how you use this website. These cookies will be stored in your browser only with your consent. You also have the option to opt-out of these cookies. But opting out of some of these cookies may affect your browsing experience.
Necessary Always Enabled

Performance cookies are used to understand and analyze the key performance indexes of the website which helps in delivering a better user experience for the visitors.

Analytical cookies are used to understand how visitors interact with the website. These cookies help provide information on metrics the number of visitors, bounce rate, traffic source, etc.

Advertisement cookies are used to provide visitors with relevant ads and marketing campaigns. These cookies track visitors across websites and collect information to provide customized ads.

Other uncategorized cookies are those that are being analyzed and have not been classified into a category as yet.