The Crawler mobile robot, which the company recently included in its portfolio, has also found application in vineyards. It thus replaced the Androver II testing platform, on which RoboTech Vision had been developing autonomous navigation between vineyard rows for more than two years. The platform has a high load capacity, thanks to which it can drag a mowing tool behind it and, in addition to moving, also maintain the vineyard.

RoboTech Vision announced that it was completing the AVN algorithm for autonomous vineyard navigation in December 2020. The last modifications included the completion of the hardware part of the project. To test the software, the company used the Androver II testing platform from the beginning, which it developed from scratch. The mobile robot had a sprung Double Ackerman chassis and BLDC HUB motors, ensuring quiet and maintenance-free operation. Although this design proved to be suitable for a robot intended for agriculture, the company eventually preferred differential kinematics in the form of the Crawler robot with a track chassis. The AVN algorithm can now be applied to both the Double Ackerman and differential kinematics device.

“Androver II with all-wheel turning and drive was very capable in the field and served us to debug the algorithms, but in a real application it has several disadvantages compared to Crawler. The first is a large turning radius. While Androver II first went through even rows and returned via the odd ones, Crawler can autonomously go from row to row. Although the track chassis is more energy-intensive when turning, it is more suitable for uneven terrain. The Double Ackerman chassis is also harder to manufacture. Androver II was also not built for sale, so it did not contain any loading area on which other equipment could be deployed.”

When deploying Crawler in the vineyard, the company thought not only of its autonomous movement, but also of the role it was to fulfil. As a very durable platform with a load capacity of up to 80 kilograms, it applied a mowing tool to it to maintain the space between the rows. The robot has a low centre of gravity and IP 65 protection, thanks to which it can be used with a spray tank, for example. RoboTech Vision now cooperates with Vitiport and Spinbotics, their sensors and robotic arm could extend Crawler’s role in the vineyard to data collection and root labelling. Crawler contains BLDC drives with worm gearboxes and precise position control, which make it a very precise platform to be used to perform really sensitive operations.

Although RoboTech Vision has replaced the platform with a track chassis for vineyard automation, the principle of autonomous navigation remains unchanged. Initially, the company tested its software with a 2D laser scanner, and after success, it decided to improve this method with a 3D scanner. Finally, the company developed its own RTV sensor Box. The combined sensor consists of a 360° camera, a front camera and a 3D scanner, with which the robot segments the vines and moves between them. The device still moves in the vineyard using a visual system, in a reactive manner without GPS. Thanks to the sensor, artificial intelligence algorithms and IMU, Crawler can turn autonomously from row to row and moves without collisions even between rows that do not end in parallel. The IMU, RTV Sensor Box and neural networks also serve the robot to detect obstacles in its path, in front of which it either stops or reschedules the path.

Navigation works easily. At the beginning, the user chooses the number of rows for the robot to go through and starts navigation. Crawler transmits a camera image and telemetry data via Wi-Fi to the control centre, where the device is monitored by a teleoperator and, if necessary, the teleoperator can turn it off remotely. The device can also be switched off on-site with the emergency button. RoboTech Vision is also completing a docking system, which the robot will go to autonomously in the event of a low battery to recharge. The AVN algorithm can also be used in an orchard or combined with the AON algorithm. Crawler will thus not only move autonomously between the rows of vines or in the orchard, but also along the road and can navigate autonomously to the starting point in vineyard.

“In addition to changing the platform, developing docking and adding a mowing tool, we have also improved autonomous navigation. We have added smart row bypassing, where the robot doesn’t start turning until it has enough space to move. This will prevent damage to the device and the vine roots. Other changes in the algorithms include the extension of the application with an interactive map, where the user can check the planned route of the robot.”

An autonomous robot by RoboTech Vision will inspect a power station 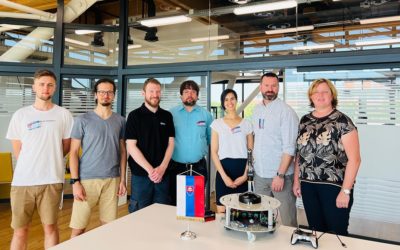